The European Movement in Serbia - Kraljevo

The European Movement in Serbia – Kraljevo

The European Movement in Serbia – Kraljevo (EPuS – Kraljevo) is an citizens association, founded in 2010, with the aim to initiate and monitor the EU integration process of our country.
We are active in the following areas: researching public policies and advocating European integration, especially at the local level, raising public awareness of the importance of the European integration process, informing the public about all relevant aspects of the process, creating conditions for adequate application of European values and standards in human rights and sustainable development. communities. The area of achieving the goals of the “European Movement in Serbia – Kraljevo” is to contribute to the creation of a democratic, multi-party society and equality between people and their communities, as well as the promotion of European values and achievements, while supporting processes and phenomena in Serbia. water.

The goals of the European Movement in Serbia Kraljevo are: promotion of European ideas and values and work on their implementation, advocacy and work on bringing our country closer to Europe and inclusion in the family of EU member states, realization and protection of human rights and freedoms as the most valuable European heritage, environment, promotion and protection of the cultural and historical heritage of Kraljevo, promoting understanding, mutual knowledge and cooperation between people and communities and encouraging comprehensive and free communication between them, especially in science, economy, culture, education, ecology, information and politics, influencing to the public of the city of Kraljevo and Serbia to direct its engagement towards democratic action in a multi-party state and towards achieving equality of people and their communities while respecting the standards adopted in Europe, development of non-governmental organizations in Serbia, especially in Kraljevo, education of Serbian citizens for learning will in democratic processes and participation in self-government, encouragement and development of freedom of thought and speech.

In our work so far, we have realized a large number of public events (forums, public debates, round tables and workshops) with the participation of credible speakers, established partnership with the local civil sector and the media. Membership in the European Movement Network in Serbia is of great importance in our work, through which we cooperate with colleagues from other cities who are engaged in similar activities and have the same or similar goals. We have established partnership cooperation with the Faculty of Mechanical Engineering and Civil Engineering in Kraljevo, the Faculty of Political Science and the Faculty of Applied Ecology Futura, especially in the segment of local development planning based on knowledge and scientific achievements. Also, our association brings together members who have personal competencies and references, which contributes to the reputation of the association in the local community.

Recently, we have paid great attention to the development of civic activism at the local and national level, especially in the field of strengthening the capacity of local communities to actively participate in local development planning.

So far EPuS Kraljevo has been supported for two projects, both within the grant scheme „Local advocacy grants“. 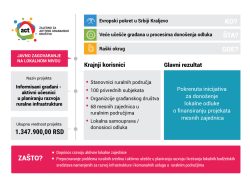 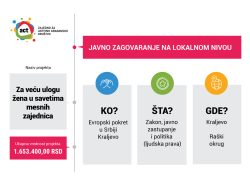